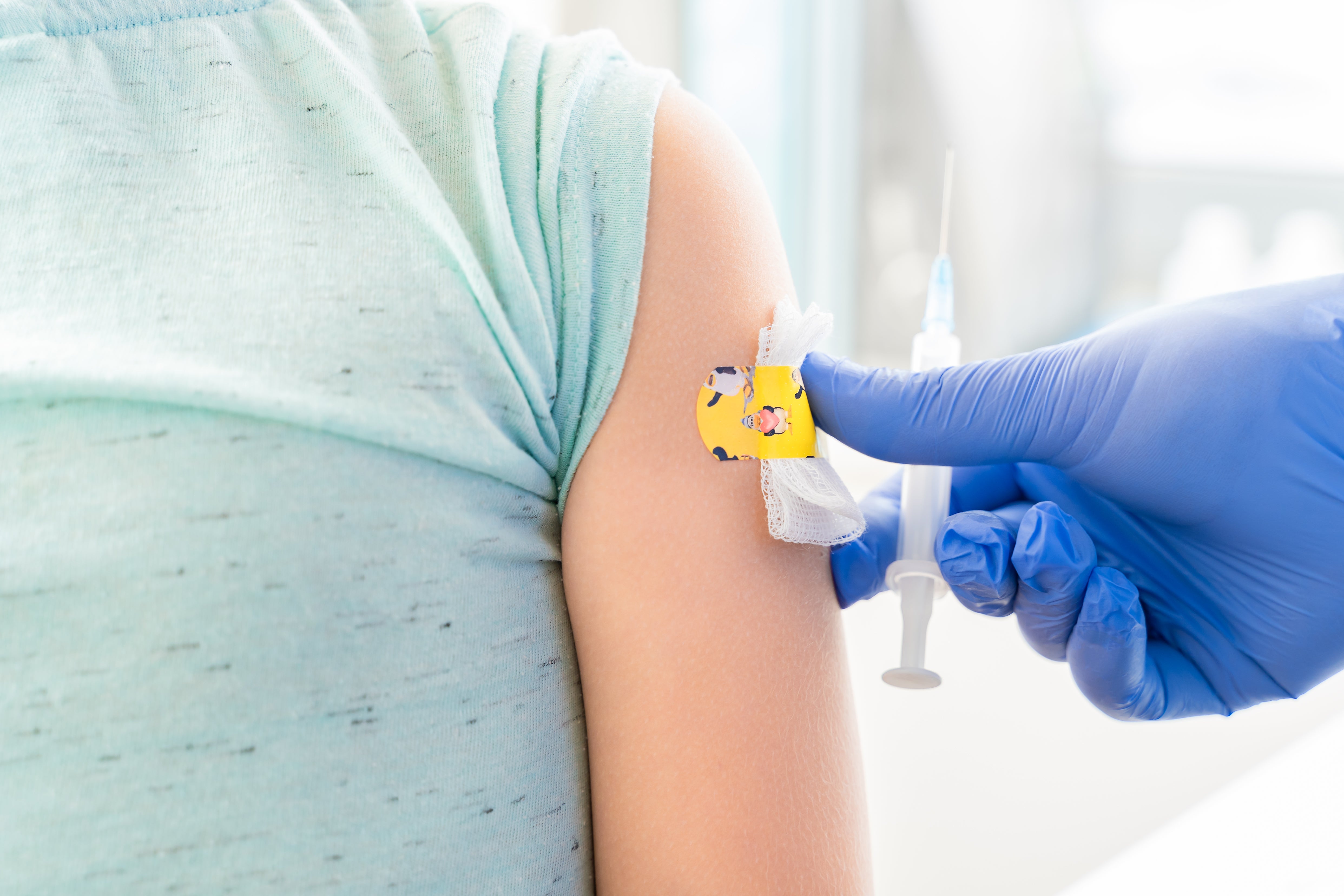 Nearly a year after the first COVID vaccines became available for adults in the U.S., the moment millions of parents have been waiting for has arrived: The U.S. Food and Drug Administration has authorized the Pfizer-BioNTech mRNA vaccine against COVID for use in children ages 5–11.

An FDA advisory committee voted nearly unanimously Tuesday to recommend authorizing the vaccine for young kids, which the FDA did today. Next week, a Centers for Disease Control and Prevention advisory group will meet to review the data and will likely recommend the vaccine for all children ages five to 11.

Nathali Rodriguez, a mother of two in Grand Prairie, Texas, says she is calling her children’s pediatrician this week to try to schedule their vaccine for the first day it is available. “I want to get them a vaccine as soon as possible,” Rodriguez says. “I feel like we’re at that light at the end of the tunnel. Just knowing that they’ll be vaccinated makes me breathe a little bit easier, and with the holidays coming up, we’ll feel a lot safer being all close together.”

The vaccine has been “tested meticulously in children according to the FDA’s guidelines” and found to be safe while generating a very good immune response, according to Kawsar Talaat, an epidemiologist at the Johns Hopkins Bloomberg School of Public Health and a principal investigator of the Pfizer-BioNTech vaccine trials in children aged six months to 11 years.

It is especially important to vaccinate kids right now that they are back in school, and given the higher disease rates seen with the Delta variant surge, which has resulted in more pediatric hospitalizations and deaths, Talaat says. More than 1.1 million U.S. children were infected with COVID in September alone, and 41 died, Talaat notes, citing data from the CDC reported by NBC News. Although severe disease is unusual in this age group, “a small minority of 1.1 million is a lot of kids ending up in the hospital,” Talaat says, and 41 deaths is “a lot of kids dying from a disease that hopefully will be completely vaccine preventable within the next few weeks.”

Early in the pandemic, COVID appeared mild enough in children, and their viral transmission rates low enough, that vaccination was not a priority for this age group—but that was before Delta. Paul Offit, an infectious disease pediatrician and director of the Vaccine Education Center at Children’s Hospital of Philadelphia, notes that children accounted for only 3 percent of cases at the start of the pandemic, but now account for closer to 27 percent. “I think you can reasonably consider this to be a disease of children, and therefore children need to be protected,” says Offit, who serves on the FDA’s Vaccines and Related Biological Products Advisory Committee, which reviewed the Pfizer data. COVID is much more serious than a respiratory disease like influenza, he adds.

“What this virus does that’s unique [among] all respiratory viruses is it causes you to make an immune response to your own blood vessels. I haven’t seen anything like that before,” Offit says. About one in 3,000 children with confirmed SARS-CoV-2 infections, including those that are mild or asymptomatic, develop multisystem inflammatory syndrome (MIS-C)—a condition that can involve the lungs, heart, kidneys, liver and other organs—about four to six weeks later. “I don’t know of any respiratory virus that does that,” Offit says.

Most of the infections occurred in August and September, when Delta was the dominant variant. The trial did not measure the effectiveness in preventing asymptomatic infections.

The data also showed that children ages five to 11 responded to a lower 10 microgram (mcg) dose just as well as people ages 16 to 25 responded to the 30 mcg adult dose. In fact, the average antibody levels in children with the lower dose were a smidgeon higher than that seen in the teens and young adults (albeit by less than 5 percent).

“There are three [COVID-related] diseases that have now become vaccine-preventable in children: [acute COVID respiratory disease, MIS-C and long COVID],” says Sallie Permar, chair of pediatrics at Weill Cornell Medicine and New York-Presbyterian Komansky Children’s Hospital. Permar also noted the importance of the vaccine even for children who have already had a COVID infection. “For whatever reason, natural immunity is not as good at protecting individuals in the long term against severe disease,” Permar says. “Even where a child has been infected, they still may not have that full protection against severe disease that we know the vaccine can provide.”

The study data revealed that the vaccine’s side effects in children under 12 were similar to what was seen in adolescents but milder, closer to what was seen in adults older than 55. Fever, chills, headache and fatigue were all less common in kids than in teens and young adults, and the former experienced less joint pain than older adults. After the first dose, one in three kids felt tired, and one in five had a headache.

After the second dose, rates of fatigue (39 percent) and headache (28 percent) were slightly higher than after the first dose, but the only side effect reported more often by younger children than by teens and older adults was redness and swelling at the injection site, which occurred in 10 to 20 percent of children who received the vaccine. About three quarters of children in the trial reported having pain at the injection site. No serious or severe side effects related to the vaccine occurred, and there were no severe allergic reactions.

There were also no cases of myocarditis or pericarditis, inflammation of the heart muscle or lining around the heart that have occurred rarely after vaccination in adolescents and young adults, primarily in males. Although Pfizer has received some criticism for running a trial with too few participants to detect myocarditis cases, “no trial could be large enough to detect the extremely rare side effects known to be associated with the vaccine,” Permar says. In the group with the highest risk, boys aged 16 to 17, the risk of myocarditis after vaccination is approximately one in 5,000. “But there’s good reason to anticipate those possible side effects will be even rarer in younger children because the dose was designed specifically for their age group,” Permar says. Each dose, given three weeks apart, is 10 mcg instead of the 30-mcg dose authorized for teens and adults.

In its review of the Pfizer data, the FDA advisory committee determined that the vaccine would prevent enough severe COVID cases to outweigh potential risks of vaccine-related myocarditis, even if myocarditis rates from the vaccine are similar in children ages five to 11 as they are in older kids. That is unlikely, and not only because of the lower dose, Talaat says. “Myocarditis has a higher frequency in adolescents and young adult males, independent of any vaccine,” Talaat says. “They just seem to be at higher risk for it, and that same risk doesn’t exist in children ages five to 11. So just naturally, independent of the vaccine, the rates of myocarditis should be lower.”

For parents still concerned about myocarditis, Offit notes that cardiac problems occur with MIS-C (a complication of COVID) as well, and at higher rates than that from the vaccine. “There are no risk-free choices,” he says. “There are just choices to take different risks. If you vaccinate, you may have a very rare risk of having myocarditis from this vaccine,” but published evidence to date suggests it is temporary and lacks any long-term effects, he says.

The biggest benefit to vaccinating children is preventing them from getting sick. But vaccinating kids also reduces gaps in immunity across the population, which in turn lowers the likelihood of new viral variants developing, Permar says.

“We will do be doing our part to provide the population immunity that will decrease virus spread and thereby prevent the next dominant variant,” she says. “Children are part of the [virus’s] transmission chain. They still spread the virus, including in households, so you’re protecting those who do not respond well to vaccines and have immune-compromising conditions by vaccinating your child.”

The vaccine authorization’s timing is also ideal before winter family gatherings increase the likelihood of transmission. “Getting your vaccine [now] will ensure that there may be a second dose administered before the holidays when you’re getting together with your extended family,” Permar says.

In fact, for millions of families, the most meaningful benefit of the vaccine is regaining the freedom their children lost to the virus more than a year and a half ago. For Rodriguez, whose husband has a high-risk medical condition, the vaccine means their family can attend church again—they stopped attending when the congregation stopped masking—and her five-year-old son can play soccer after nearly two years of begging to play.

“Just knowing that there’s a vaccine now, we can maybe get a little bit back to normal and let them be a little bit more free. It just gives me a little bit of hope that I don’t have to worry as much anymore.”

In rural Alaska, the vaccine means an end to extreme isolation for the young children of Elizabeth W., mother who asked to withhold her last name because she has family and friends who oppose vaccination. Her 10-year-old son takes immunosuppressants for Crohn’s disease, and her six-year-old daughter has hemophilia and is therefore at higher risk for severe COVID if she gets infected. Both children have been so isolated from others that her son has begged her to “pretend” he’s 12 and get him the vaccine early. Now that he and his sister can be vaccinated, they can resume attending church and visiting family in other parts of the state.

Elizabeth Harman, a philosophy professor at Princeton University in New Jersey, says her 11-year-old daughter is excited to play basketball this winter after missing last season. She and her five-year-old sister participated in the Pfizer pediatric trial but did not know if they received the vaccine or the placebo. Pfizer will be “unblinding” participants now that the FDA has issued the EUA.

The girls joined the trial partly in the hope of getting vaccinated “sooner rather than later, to keep them safe and also keep us safe,” Harman says, but they also wanted to contribute to ending the pandemic.

“Getting vaccinated is a way that each of us can help to end the pandemic,” Harman says. “When your kids get vaccinated, they are doing a concrete thing to help end the pandemic, and it’s a wonderful thing you can do for other people.”