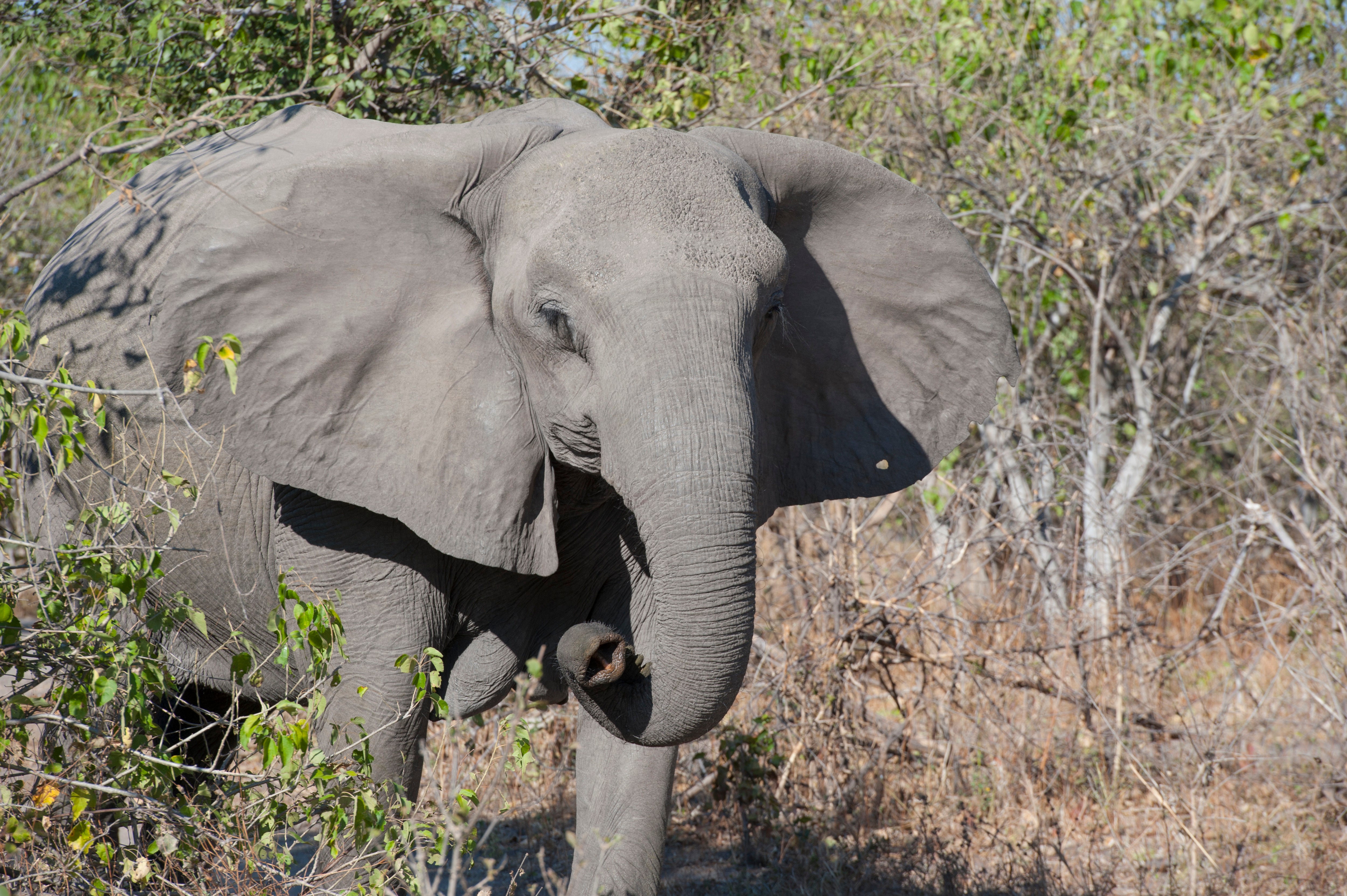 In 1989, when elephant ethologist Joyce Poole began carrying out surveys of three East African elephant populations to understand the impact that heavy poaching was having on them, she quickly noted several stark trends. There was a huge skew in the sex ratio, with very few adult males. Many families lacked older females—and many of those females had no tusks.

Poole’s observations—which were used a few months later to support a ban on international ivory trade—were alarming, but they mostly made sense. Poachers, she knew, prioritized elephants with the largest tusks. Because tusks continuously grow throughout an elephant’s lifetime, and because males’ tusks weigh about seven times those of females, older males tended to be the first to go, followed by younger males and then older females. It also made sense that tusklessness—a trait naturally found in a minority of animals in Africa—was apparently being artificially selected for because poachers had no reason to shoot such an animal.

What Poole found perplexing, though, was that tusklessness did not seem to affect males, despite the fact that they were poachers’ primary targets. “It’s something I had puzzled over for so long,” says Poole, co-founder and scientific director of ElephantVoices, a nonprofit science and conservation organization. “The more killing there was, the more tuskless females you got. But why weren’t there any tuskless males?”

More than 30 years later, she finally may have her answer. Tusklessness, according to a new paper in Science, can be attributed in large part to a dominant mutation on the X chromosome—a genetic change that also explains the sex skew Poole saw. In females, mutations in a key gene on one of their X chromosomes seems to be responsible for tusklessness. But in males with no other X chromosome to fall back on, that mutation appears to cause death in the womb.

“This is a beautiful study that is certain to become a textbook example of how intense human exploitation of wildlife can rapidly change the natural world,” says Jeffrey Good, a mammalian evolutionary geneticist at the University of Montana, who was not involved in the research. “Such a deep genetic understanding of complex evolutionary changes in large free-ranging animals would have been unobtainable just a few years ago.”

Shane Campbell-Staton of Princeton University, co-lead author of the new paper, has spent his career studying the ways that humans force such evolutionary changes across the tree of life. Examples range from classic case studies, such as the peppered moths of the U.K. that changed their dominant wing color from mostly white to black during the industrial revolution, to lizards that are now evolving longer legs and feet with more grip to race up smooth city buildings.

Typically, though, such studies focus on small creatures that have large population sizes and fast generational turnovers because changes they undergo are easier to observe in real time. This has left a notable gap in the literature that the new paper helps to fill. “This study is among the first to show that selective killing of large vertebrates can have a direct impact on evolutionary change,” says Fanie Pelletier, an ecologist at the University of Sherbrooke in Quebec, who co-authored a perspective piece in Science about the research.

Elephants were not an obvious choice for Campbell-Staton, who has mostly focused on lizards until now. But he found himself sucked into the mystery of tuskless elephants when he watched a YouTube video about the phenomenon. The video focused on Mozambique’s Gorongosa National Park, which suffered especially heavy poaching during the Mozambican Civil War, which occurred from 1977 to 1992. Gorongosa’s elephant population declined by about 90 percent, from more than 2,500 individuals in 1972 to fewer than 250 in 2000. Like other places that had undergone intense poaching, Gorongosa’s female elephants exhibited an abnormally high proportion of tusklessness.

Campbell-Staton was just as perplexed by this as Poole had been, and he soon struck up a collaboration with her and other elephant ecologists. The researchers first needed to determine whether it was actually the selection from poaching that led to a disproportionate number of tuskless individuals or if it was just some fluke of chance that emerged as the population crashed.

Poole, who is a co-author on the new paper, combed through old natural history films and amateur videos to estimate the prevalence of tusklessness prior to the war. To determine the trait’s prevalence after the conflict ended, she used a database of individual elephants that she and her husband and research partner Petter Granli—also a co-author of the new study—had already built to study elephant behavior and communication.

The frequency of tusklessness, the team found, increased from about 18.5 percent before the war to 50.9 percent after. In population simulations, the researchers confirmed that it is extremely unlikely that tusklessness would have changed so drastically by chance alone. Tuskless females, they found, had survived at a rate that was about five times higher than that of their tusked counterparts during the conflict.

Using Poole’s database, they further confirmed that, with a single exception, female elephants with two tusks had never been observed to have a tuskless baby. Tuskless mothers, on the other hand, had about an equal proportion of daughters with or without tusks (or, in some cases, with a single tusk). This pattern suggested to the researchers a sex-linked genetic origin for what they were seeing.

The sex ratio of the offspring of tuskless mothers also indicated that the genetics responsible may be lethal for males. Instead of having sons and daughters at an equal proportion, tuskless mothers gave birth to daughters roughly two thirds of the time.

After making these observations, Campbell-Staton decided it was time to use a whole-genome analysis to pinpoint the potential genetic factors. Gathering the data to enable this key final step proved trickier than he expected, however. “We were going to drive around at Gorongosa, spot an elephant, see if the elephant had tusks or not, wait for the elephant to poop and then collect its DNA,” he says. “It seemed simple enough—except we drove all day, every day for a week and didn’t see a single elephant.”

Fortunately, another research team was carrying out a collaring project to track matriarch elephants. Campbell-Staton and his co-first author, Brian Arnold of Princeton, were able to join forces with the other researchers to collect blood samples from 18 females—some with tusks and some without—that would meet the genomic requirements for the project.

Using those samples, they identified candidate regions in the genome that, when mutated, seemed to explain tusklessness and its apparent male lethality. One of the genes, AMELX, is known from decades of basic research in mice and humans to play a role in mammalian tooth development. Additionally, disruptions to the same region of the X chromosome in humans is associated with a syndrome that usually causes male fetuses to abort in the second trimester. Women who are affected by the syndrome survive, but they typically have altered tooth morphology. In particular, they often are missing their upper lateral incisors—the anatomical equivalent of tusks in elephants.

“The study shows that tuskless male elephant offspring are not viable, meaning that population decline is accentuated,” Pelletier says. “Not only do animals die due to poaching, but there is also additional decline because half of the male offspring from the surviving tuskless mothers do not survive.”

Good agrees that the findings are alarming. “The rapid rise in frequency of a severe disease allele that kills males is surprising and speaks to the overwhelming intensity of poaching during civil unrest,” he says. “These changes came with enormous cost to the overall genetic health of these declining populations.”

Ultimately, Campbell-Staton says, the study “speaks to the ubiquity of the human footprint as an evolutionary force.”

There is some good news, however. As poaching in Gorongosa has been stamped out through sustained conservation efforts, P the number of baby elephants born tuskless has begun to decrease. As the researchers noted in their study, the generation born after the war had a 33 percent frequency of tusklessness, compared to 51 percent for the generation that survived the war. Nature, in this case at least, seems to be correcting itself. “Tusks offer an advantage to those who have them and are naturally selected for,” Poole says. “If we keep the pressure off these elephants, the rate of tusklessness declines with each generation.”