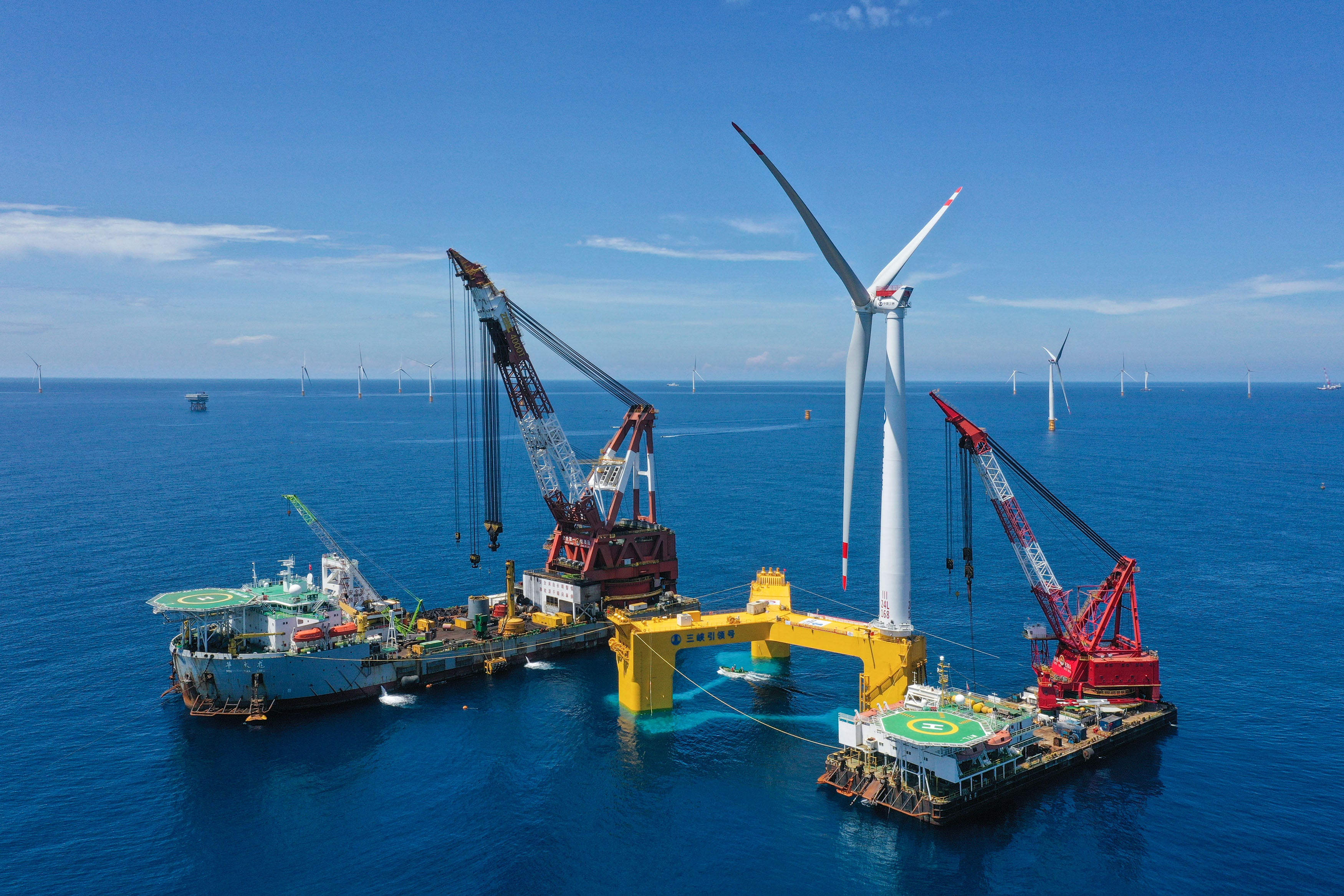 Let’s talk about building an offshore wind farm. For starters, it’s not your average construction job.

Vineyard Wind I, the country’s first major project, is planning to use turbines longer than the John Hancock building, which is Boston’s tallest skyscraper at 790 feet. And whoa, boy, these things are heavy. Just take the nacelle—that’s the long narrow piece that houses the motor and sits right behind the blades. It weighs a whopping 794 tons. That’s almost as much as two fully loaded 747 airplanes.

Now, imagine installing these things in the ocean.

Today, we’re going to break down how to actually install an offshore wind turbine. Let’s get started.

The type of foundation a developer uses generally reflects the depth of the surrounding waters. In the Vineyard Wind project area—some 15 miles off Martha’s Vineyard—water depths range from 115 feet to almost 200 feet deep. That’s relatively shallow as far as these things go, which means you can use something called a monopile for your foundation.

A monopile is a steel tube that is driven into the seabed. Vineyard Wind’s monopiles will measure up to 34 feet in diameter and 312 feet from end to end. About half the structure will be buried beneath the seabed, according to the company’s federal environmental permit.

In deeper water, developers use something known as a jacket. Jackets are sort of like tripods. They have three or four legs that are anchored to the seafloor. Vineyard’s permit provides for up to 10 jackets.

Offshore wind turbines have been getting bigger. A lot bigger.

Consider this example: The five turbines used at the Block Island Wind Farm off Rhode Island are each capable of producing 6 megawatts of electricity. They measure about 300 feet from waterline to rotor and boast 242-foot-long turbine blades.

Now contrast that to the turbines Vineyard Wind plans on using. They will be able to generate 13 MW and measure almost 500 feet from the waterline to rotor. Its blade stretches more than 350 feet—that’s almost as long as a football field. Just one turbine can generate enough power for 16,000 homes.

There are about 50 boats in the world capable of installing offshore wind turbines, according to the Government Accountability Office. These ships are sometimes called jackup boats because they have legs that are lowered onto the seafloor and lift the vessel up and out of the water when installing a turbine.

There are two challenges with jackup boats. The first: None of them are American. That’s problematic because the United States has a law prohibiting foreign-flagged vessels from traveling between American ports.

Developers have a way around the law. When Deepwater Wind built Block Island Wind Farm, it used a Maltese-flagged ship named the Brave Tern. The Brave Tern anchored off Rhode Island and was fed parts and equipment by a small fleet of barges and transport vessels.

Vineyard Wind plans on using a similar strategy. Its problem is that there are few jackup boats with cranes tall enough and strong enough to install the Haliade-X. In fact, there are only three boats in existence today capable of installing a Haliade-X, according to researchers at Tufts University. Vineyard Wind contracted with the Deme Group, a Belgium-based company that owns one of them: a 438-foot vessel named the Sea Installer.

Paul Murphy is one of the few Americans with experience building an offshore wind farm. He oversaw the construction of the Block Island Wind Farm and is one of the people leading Ørsted A/S’s South Fork, Revolution Wind and Sunrise Wind developments off southern New England. We asked him how to actually assemble one of these projects.

That means doing a lot of the work onshore. In Ørsted’s case, its first two projects will be put together at a staging ground in New London, Conn. Vineyard Wind will use the Marine Commerce Terminal in New Bedford, Mass.

Typically, the tall part of the turbine known as the tower comes in three, 100-foot-tall sections, Murphy said. Those are stacked and welded together onshore and outfitted with all the necessary cables and electric wiring.

They are then floated out to the wind development and installed using one of those massive jackup boats. Once the tower is securely fastened to the ocean floor, the nacelle, which houses the motor, is placed on top of it, and each of the three turbine blades are attached.

Of course, this just covers installing the actual turbines. Developers also need to run transmission cables between the turbines and into an offshore substation, which then feeds electricity into a main transmission cable running to the mainland.